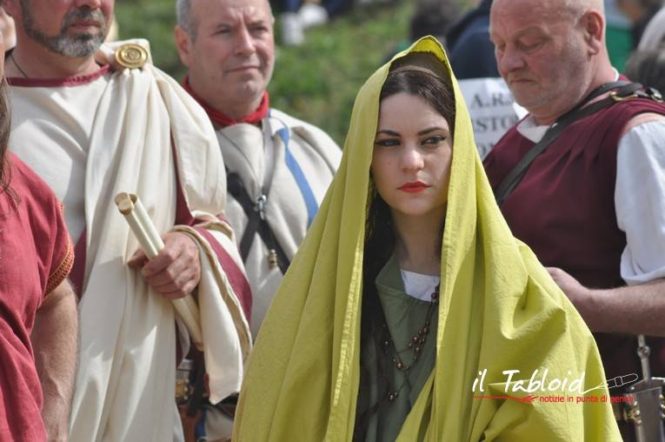 Special guest at The Fear and the Fury: Danielle Fiore

Following an Imagines tradition inaugurated in our first conference in Logroño (La Rioja) in 2007, this year we will have again the opportunity to meet an artist whose work is directly inspired by Antiquity. Our star in Turin will be the local Danielle Fiore, the first Italian photo-model specialised in historical costume. Danielle’s work is known in national and international journals and media. In addition to her work as a model, she has a long experience in the fields of photography and historical reenactment and holds a BA in History by the University of Turin.

In 2013 Danielle started sewing her own garments and founded Il Fiore Nero: Handmade Creations. The costumes by Il Fiore Nero (see also the facebook site) are all Danielle’s original creations and follow – as far as it is possible – historically accurate cuts, techniques and materials. Her creative work focuses mostly on Ancient Rome and the Medieval Age, her favourite periods, but also on the Renaissance and the Victorian Age.

Danielle also offers useful sewing tutorials in her Youtube channel, where she likes to share her knowledge and experiences. Her amazing website, as well as her facebook site provide plentiful of examples of her modelling work, of her historical costumes, shooting sessions and the reenacment events in which she takes part.

We can’t wait to meet Danielle and learn more about her exciting costumes!!

Some examples of her fascinating work:

Here she explains details on the basic garments of Roman women, with practical examples on the tunica and the palla.

–Modelling for the photographer Arianna Ceccarelli in the Roman ruins of the Park of the Aqueducts in Rome, a place haunted by magical sunsets that invites you into the past.

-Do you know how to make a Roman dress? Here a Making OF from Danielle’s youtube channel provides a practical tutorial step by step:

-And here, modelling a black Tudor dress, illustrated by this marvellous picture of Anna Boleyn’s Black gown. 16th c. (on the right)